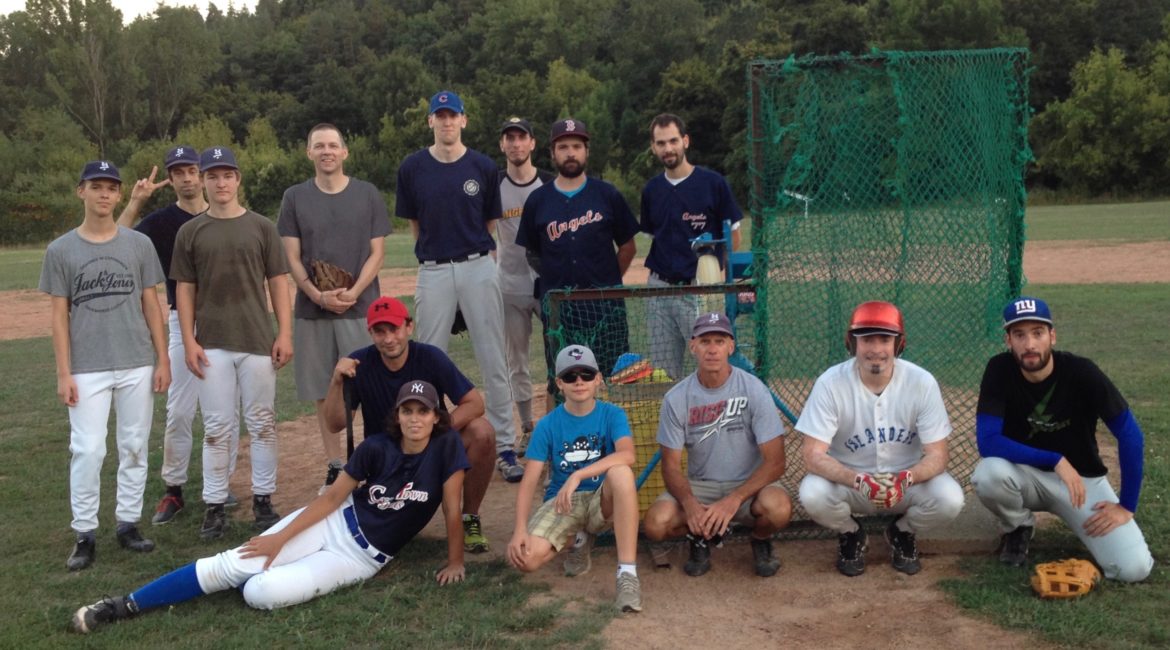 Summer Baseball League continues and we need your help recruiting more age 12 to age 18 players for the 2018 season. Joining us for our Friday night Summer Series will help you learn the game while having lots of fun.

August 18, 2017: With a lot of people on last minute holidays before school resumes we were a bit shorthanded for Friday night’s Summer League game but by 18:30 we had a mixture of 12 CR Angels and SZ Sleepwalkers on the field. Decision by the coach (your’s truly) to block off Right Field and play the CR six vs the SZ six with Benjamin operating the pitching machine.
It wasn’t a smart decision by the coach when I realized that our SZ lineup included all three of our lefties but I made the best of it telling Marton Szaszko, Roland Racz, and Viktor Turcsanyi that everyone on the team needs to learn to hit ‘opposite field’….especially left handers!

To avoid long innings we made it a 5 run per inning max and the Angels immediately came out and put 4 runs on the board. SZ stayed close with 3 runs in the bottom of the first. Then it was five for the visiting CR team in the top of the second which the Sleepwalkers matched in the bottom of the inning. We entered the top of the 3rd with the score 9-8 and by then the defenses started to establish themselves; two runs for each team in the 3rd inning. By then coach Andras arrived and the Sleepwalkers could re-jigger their infield a bit with him moving to 3rd base; Roland to SS, and Rebekah to first. Things started to look better but in the 5th inning the Angels again put 5 across with several monsters hits into the gap between CF & LF. SZ couldn’t match and as darkness descended we finished with an 18-12 win for the Angels.

Since it falls me me to write these things. 😀 …I get to toot my own horn and point out my 4 for 5 performance at the plate with two triples (It helped that nobody thought I could run that fast!), a double and a single. Roli and Rebekah made several great put-outs SS-1B in the late innings. Viktor, who’s always been a pull-hitter did respond to the batting assignment and put several (unfortunately a couple just a few meters foul) down the 3rd base line. Marton moved in from his normal position in RF and played a strong few innings at 2B. Istvan, playing in his first game with the SZ team, connected solidly with each plate appearance but it probably didn’t help that we had a 45 minute throwing session at Thursday’s practice and his arm was a bit too spent to be playing LF with the Angels hitting several that made it to the fence.

Thanks also to the Angels for continuing to join us for the Friday night games. I think it has helped both teams keep their skills sharp as we head into September’s remaining league games.