Sunday June 25: Just returned from Erd where four of our MINORS players spent the past several days competing against 22 other players for a spot on the U12 Hungarian National Team that will travel to Poland on July 16 to represent Hungary in the Europe/Africa LL Championships. The winner of this tournament gets an all-expense paid trip to the USA to play in the annual Little League World Series.

I’m extremely happy to announce that 10 year old Matyi Apati-Deli was selected as an outfielder for the team. Matyi’s excellent play and strong character was apparent all season for the Sleepwalkers Minors team. And, as one of his coaches, it’s been a joy watching him develop as a player and a young man.

Traveling with him to the camp were Benedek Nemeth, Riley Stec, & Benjamin Bowman. All four were facing long odds in that they had participated in the ‘instructional’ MINORS division all season while all the other players at the camp had several years of experience playing in the much more competitive MAJORS division. Kudos to all of them for the hard work they put in preparing for the camp and being good teammates.

Best of luck in Poland Matyi! 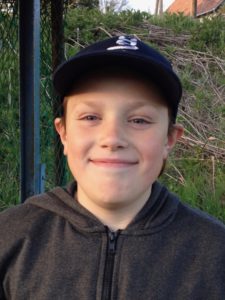