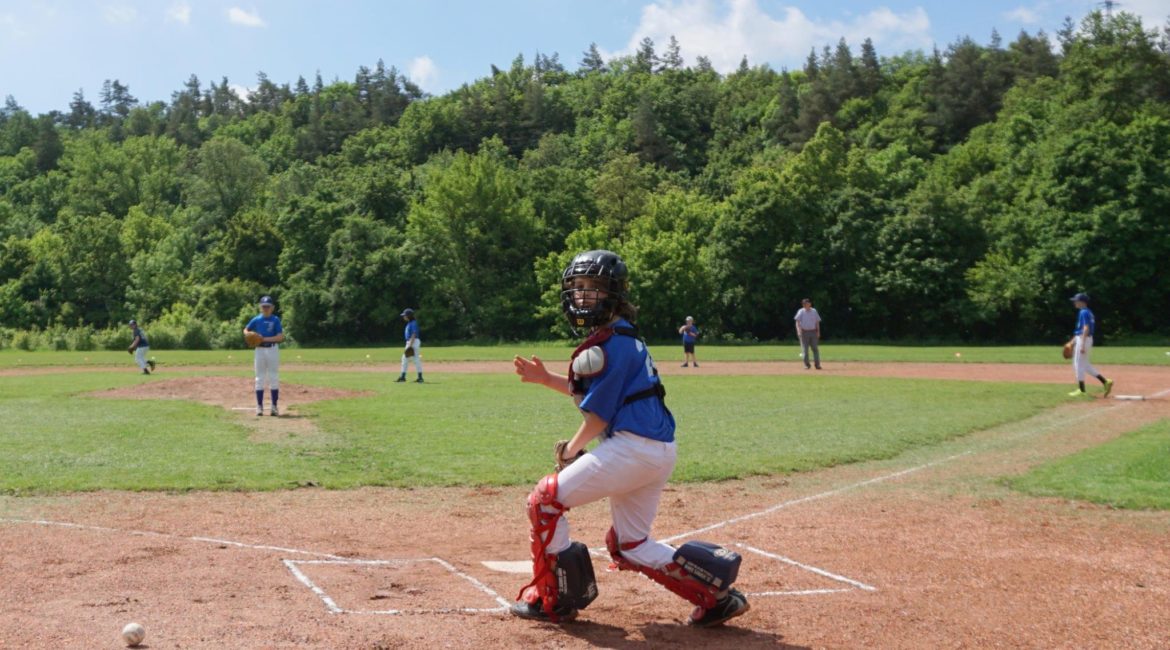 Busy weekend for the Sleepwalkers. Three games and a team BBQ!

On Saturday May 13 the NBIII team traveled to Nemesvamos to play the undefeated Tigers. As we took the field to do our warmup after a 2 hour drive the rain started to pour down with wind gusts up to 25kph. Things could only get better, or so we thought.

The Tigers had lost their field two seasons ago due to city improvements and were in the process of relocating to a new field. Unfortunately work had just begun and we found ourselves on a field lacking dugouts, benches, outfield fencing, restroom facilities, base paths, foul lines, dirt sliding areas (particularly troublesome for a team like ours that likes to use its speed), and a scoreboard. Also somewhat uniquely troublesome was it was built on ground that was on a 7% slope with a pitchers mound(?) that was actually below home plate so our pitchers, Viktor & Xaver, had to throw slightly uphill. A daunting task was ahead for us in adjusting.

Joe Bowman got the Sleepwalker on the scoreboard first with a Home Run in the top of the first with a shot to Right field but that would be the last time the Visiting Szentendre team managed a lead. Kristian Matyas, starting his first game at Catcher, also pounded out a dinger for the Sleepwalkers in the top of the 2nd inning. Unfortunately that would be the last time (except once) that we were able to advance a runner past first base for the remainder of the game.

The Tigers took advantage of our lack of putting the ball in play by just making solid contact with Viktor’s and Xaver’s uphill pitching and our team speed & strong arms in the outfield was effectively neutralized by a bumpy outfield and gusty wind that led to 5 dropped balls and 4 hits that were called ground rule doubles when they bounced into the high grass.

Credit goes to the Tigers though in some solid hitting, strong pitching, and making few errors in the field. We congratulate them for getting back into the league this year (we certainly know how difficult it is to maintain a baseball field when the local and national government only wants to fund more football stadiums pitches!) and wish them well in continuing work on their field. Final score: Nemesvamos-24, Sleepwalkers-2.

On Sunday May 14 the Minor team hosted a triple-header with the Erd Cardinal and AISB Sparks (American International School of Budapest).

Our kids got out to a flat start against Erd but rebounded well in their second game (the BBQ put on by the parents had to help….THANKS parents and Christian from the NBIII team).

The entire lineup hustled to get on base in the game against AISB to make up for our lack of firepower in the first game. Smart base running by all. Some quality putouts by our infield of Jonathan (3B), Gergo (SS), Riley (2B), Benjamin (1B), Benedek (C), and Matyi (P). Zalan (CF), The Csermák brothers (RCF/LF), Miguel (LCF), & Vince (LF) rotated in the outfield and managed to keep every ball in front of them and get it back to the infield quickly; Zalan even running a ball down 30 meters in the gap and making a long throw to Gergo covering second).

Special mention to Zalan as well in recruiting his sister Hanka to come in for Miguel in the second game after Miguel had to leave with an upset stomach. Hanka played well scoring one run and nearly another just getting beat by the ball by one step at home in the 4th inning.

Another special mention for Vince who made a valiant attempt on a towering fly ball in the final inning. Ended up with a cut lip due to his efforts but his father said he was feeling much better and was certainly ready to take the field next week.

Thanks to all the parent for keeping the kids well fed, well hydrated, and covered with suntan lotion between games. It made a difference. We also raised 17000ft for our Bleacher Repair Fund from the other teams with those hit dogs, chips, drinks, and Salat. Way to go!

Finally a big shout out to Marton, Tommy, and Viktor from the NBIII team for umpiring all three games. The coaches and kids from the youth team really appreciate that kind of support.